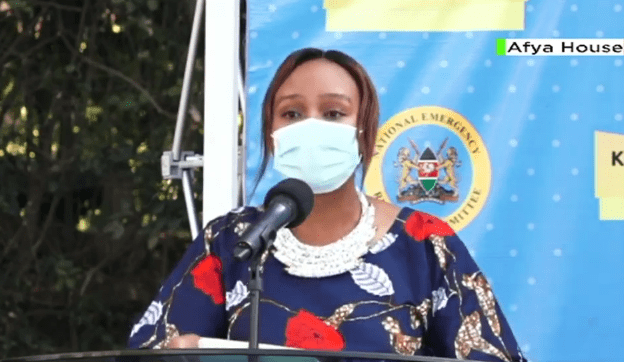 Speaking during the daily Covid-19 briefing at Afya House, the CAS stated that 2,711 samples had been tested during the period bringing the total samples tested in the country to 61,971.

Of the 72 new cases, 70 were identified as Kenyan nationals while the other 2 were from Somalia and Uganda. She also said 44 are male while 28 female.

The CAS announced that 9 more people had been discharged after recovering, bringing the total recoveries to 392.

“9 Covid-19 patients have been discharged after full recovery. Recoveries now stand at 392,” she stated.

Unfortunately, Dr. Mwangangi noted that one more patient succumbed to the virus, taking the total fatalities to 52.

She further revealed that the Ministry of Health has so far stepped up containment measures by setting up 20 testing laboratories strategically across the country in a bid to handle Covid-19 cases.

In addition she noted that the ministry has also trained 11,000 health workers.